Adrienne Rich, who has died in California at the age of 82, was one of the most distinguished voices in contemporary American poetry. Her first collection of poems, A Change of World, highly praised by W. H. Auden, appeared as long ago as 1951, and she continued to publish new poems and essays well into the twenty-first century. Her association with Anthony Burgess has not been documented until now. 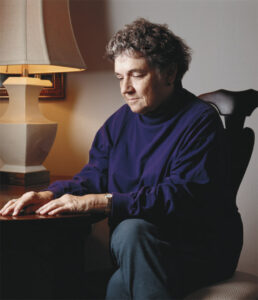 Burgess’s involvement with Adrienne Rich began in March 1972, shortly after he had been appointed as a visiting professor of creative writing at City College New York, where Rich was on the permanent staff. She had been awarded a year’s research leave, which she proposed to spend in Cambridge, Massachusetts, and she wrote to Burgess with a suggestion that he should rent her apartment at 670 West End Avenue in New York. The tenth-floor apartment consisted of three bedrooms, a maid’s room, a modern kitchen with washing machine and dish-washer, a large living room and a dining area. The sleeping area boasted air-conditioning, and there was a concierge on the ground floor. Rich was proposing to charge USD $500 per month in rent, but Burgess — who complained that he was not allowed to sublet his flat on Piazza Santa Cecilia in Rome, and would therefore have to pay double rent — managed to negotiate this figure down to $400 per month.

Confusion, which had a habit of creeping into most of Burgess’s financial dealings, was not slow to arrive. Rich discovered that a hefty ‘processing fee’ for a sub-let had to be paid to the co-operative which owned the apartment, and she proposed to charge half of this to the Burgess family. She also sent a questionnaire which asked for details of their private lives and personal habits. There was some doubt as to whether Burgess’s application to reside on West End Avenue would be approved in time for the start of term at City College. The confusion was intensified by the college’s reluctance to communicate its term dates to him. Then the co-operative declared that they were not willing to admit Burgess as a tenant until he had presented himself for interview, on a date to be determined by the committee. Burgess explained that he had a number of lecturing commitments in Ohio, and he could not guarantee to be available for interview throughout the first week of September 1972, but his protests fell on stony ears. Nevertheless, he remained courteous in the midst of these bureaucratic annoyances (‘I gladly submit to the inflexibilities of the interviewing committee’), and he flattered Rich with the information that he had been reading her most recent volume of poems, The Will To Change, ‘with immense admiration and profit.’

The Burgesses arrived in New York by sea on Friday 1 September 1972. They checked into the Algonquin Hotel, which had recently done service as one of the locations in Burgess’s novel, MF, published in 1971. The interviewing committee reported that it could not assemble until the following Tuesday or Wednesday, but Burgess and Liana arranged to meet Adrienne Rich for the first time on 2 September. She showed them around the apartment, and she was particularly concerned about the welfare of her tropical fish. She left a detailed set of typewritten fish instructions with Paolo Andrea, aged eight. Burgess agreed to water her plants. She left New York for Cambridge the following day.

Having taken possession of Rich’s apartment at last, Burgess was struck by the extent to which it resembled ‘a Lancashire cotton mill during the great depression.’ The streets around the flat were menacing. Broken bottles crunched underfoot on the sidewalk, he noted. ‘The shops are ready for demolition but crammed with goods. A lot of people mutter to themselves, but I have heard that that is a means of discouraging muggers. I have not yet been mugged, but the time has to be coming. I was pleased the other evening on West End Avenue when a multi-colored gang broke up as I scowled and headed straight into them. I know I look horrible, but I did not think I looked as horrible as that. I own an ancestral swordstick, which I refuse to see as a concealed weapon.’ But New York was never dull, and Burgess conceded that he was in no danger of suffering from loneliness there.

Burgess and Liana were disturbed to see a large poster in the street outside their apartment, which advertised (in Spanish) the services of a cockroach exterminator. Their fears were confirmed when Rich wrote to them a few weeks later with the news that her regular exterminator normally visited on the second Tuesday of each month. She urged Burgess to put his name down for a visit in order to enjoy a bug-free existence. There had been no mention of cockroaches when she was trying to persuade him to move into the property.

Burgess wrote about this infestation problem in a long essay commissioned by the New York Times, published on 29 October 1972: ‘The apartment is full of cockroaches, which seem ready now to take over this part of the city. The poster on the corner of the block encourages me to think of them as something gay, exotic, celebrated in folk-song, and not the gloomy gray creatures of British tenements. Protection against them does not seem to be possible, despite the old man who comes round with poison and shuts you out of the flat for three hours.’ Burgess received a deluge of letters in response to this article, mostly from his neighbours in the apartment building who resented him for having revealed their guilty secret. Looking through the correspondence files, it is surprising to see how many of these letters were written by young children, possibly at the instigation of their parents. The volume of correspondence received by Burgess on this occasion (and carefully filed away for future reference) points to an orchestrated campaign of letter-writing. Around this time he also received a number of abusive phone calls, ‘telling me to eff off back to effing Russia, you effing corksacking limey effer.’ This was because he had written another article for the New York Times, in which he had suggested that America would benefit from a modest amount of socialized health care, on the model of the National Health Service in Britain.

After the Burgess family had returned to Italy, a number of letters arrived relating to their activities in the apartment during the tenancy. Rich’s legal representative wrote to Burgess, accusing him of killing her fish and failing to water her plants. Various items of damage were noticed, including a mattress which was so comprehensively soiled that it had to be thrown away. Rich and her attorney presented a large bill for this unexpected vandalism of her property, but there is no evidence that Burgess and Liana ever paid it. 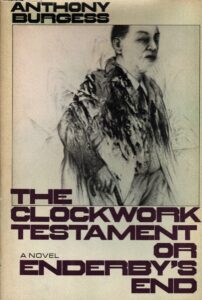 Shortly afterwards, he took revenge on Adrienne Rich for having rented him an infested apartment in a seedy neighbourhood. When Burgess composed his New York novel, The Clockwork Testament, written a few months after he had returned from New York, he did not miss the opportunity to include a cruel caricature of Rich within the text. Although the fictional landlady is not named, she is said to be feminist poet (‘a rabid ideological man-hater’) who has sub-let her air-conditioned apartment to F.X. Enderby while he is teaching creative writing at the University of Manhattan, which closely resembles City College. At one point in the novel, a disturbed young woman breaks into Enderby’s apartment and threatens him with a loaded pistol. She makes him take off his clothes and insists that he should piss over a volume of his own poems. A good deal of the action of the novel is connected to Burgess’s dislike of Adrienne Rich and her apartment.

Rich’s opinions of Burgess and The Clockwork Testament (if she ever read it) are likely to remain mysterious, at least for the time being. When she sold her papers to Harvard University, she stipulated that certain parts of the collection, including her private papers and letters, should remain under lock and key until 2050. Until that date, readers will have to make do with Burgess’s side of the story.