Burgess and the Atomic Age: Honey for the Bears and the Cold War

Near the beginning of Honey for the Bears, Anthony Burgess’s 1963 novel set in Leningrad, there is a reference to the Cambridge spies:

Not everything you do has to be political. Like those diplomats that went over that time. For all anybody knows they might have gone over because of their stomachs. In Russia, nobody gets indigestion. Everything is cooked in the best butter. A worker’s country.

This quotation from the novel can be seen as a statement of intent from Burgess who, in his writing about Russia, attempted to celebrate ordinary citizens who, as he saw it, existed on a level beyond international politics. 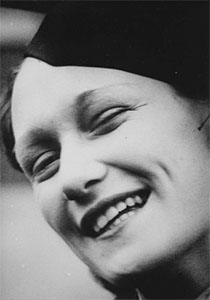 The ‘missing diplomats’, as they were called in the newspapers, were Guy Burgess (no relation) and Donald Maclean, two double-agents who, while working for British Foreign Office, had suddenly disappeared in 1951 and reappeared in Moscow. It later emerged that they had been spying for the Russians for decades.

When Anthony and Llewela Burgess (pictured) visited Leningrad in June and July 1961, diplomatic relations between the Soviet Union and the West were enjoying a long phase of friendliness and mutual collaboration. The composer Dimitri Shostakovich had made a successful tour of the United States in 1949, bringing Russian music to American audiences for the first time. The Russian Communist Party, led by Nikita Kruschev, was coming to terms with the crimes of Joseph Stalin, who had died as long ago as 1953. It was possible for tourists, such as the Burgesses, to travel to Russia with minimal restrictions.

By the time Honey for the Bears was published in 1963, the situation was very different. The Cuban Missile Crisis of October 1962 had left the world on the brink of nuclear destruction; the double agent Kim Philby, who had worked closely alongside Guy Burgess in British intelligence, had defected to Moscow in January 1963; and levels of mutual suspicion between the Soviets, the Americans and the British had never been higher.

Before he travelled to Leningrad, Burgess worried that he would find ‘a frightening steel-and-stone image of the Orwellian future’, but he was surprised to find a city of literature and art. The names Pushkin, Dostoevsky and Pasternak are mentioned frequently in his writing about Russia. In his writing about the Soviet Union, he often represents it in terms of warm and cultured people who reminded him of home.

In an interview, he said: ‘I think it was just the sense of the architecture, the rather broken-down architecture of Leningrad, the sense of large numbers of the working class, rather shabbily dressed. And I suppose in some ways the smell of Manchester — I always associated Manchester with the smell of tanneries, very pungent smells. I got the same smell out of Leningrad.’ 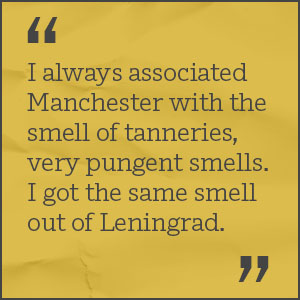 Despite Burgess’s insistence on these aspects of Russian culture, Honey for the Bears cannot be viewed as an apolitical novel. The book considers, from a left-liberal perspective which often seems naive, the politics of the Cold War and the ongoing nuclear standoff of the 1960s. Its protagonist, Paul Hussey, visits Leningrad with the intention of selling western consumer goods on the black market: a suitcase full of nylon dresses, unobtainable in the Soviet utopia. During his stay in Leningrad, he meets an American student called Alexei who offers a glimpse of how Soviet citizens experience the politics of the Cold War. He tells Paul:

Alexei, who has both Russian and American heritage, does not see any difference between the two opposing systems: ‘Russia or America, what’s the difference? It’s all the State. There’s only one State.’

Within the frame of his fiction, Burgess makes a clear distinction between the lives of ordinary people — which are full of music, poetry and traditional food — and the Soviet state, embodied in the novel by the secret police who follow Paul around the city. The state, as the novel presents it, is tyrannical but ultimately incompetent. Paul expects to see evidence of potential rebellion in the city’s young people, but he is disappointed by what he finds: ‘He had expected them to be rebels. But, of course, in a sense they were rebelling, like all the young people of the world; the trouble was that the language of rebellion was also, in the USSR, the language of the Establishment.’

Honey for the Bears is written out of Burgess’s idealistic view of the achievements of Russian poetry, music and fiction. How well he knew Russian literature is an open question: his grasp of the language seems to have been limited to a few tourist phrases. Yet his image of Russia had been formed by reading pre-revolutionary English translations of Pushkin and Dostoevsky. Among twentieth-century Russian novels, he knew only Doctor Zhivago by Boris Pasternak (film poster pictured below), who had died the year before Burgess went to Leningrad. Consumed by nostalgia for a literature he knew only slenderly and distantly, Burgess misrepresents both the past and the present of Russia in the 1960s; and his novel is certainly open to the accusation that it treats the Soviet system too lightly and indulgently.

The politics of Honey for the Bears are distinctly Burgessian, and they are broadly similar to what we find in A Clockwork Orange: Burgess presents the people, who are naturally good, in opposition to the state, which is said to be authoritarian and malevolent. This conflict between ordinary citizens and the ideology of the state is the main dynamic of the novel. Towards the end of the narrative, Paul makes a speech about the threat posed by political ideologies, whether American or Russian. He tells one of the Soviet policemen: ‘Somebody’s got to conserve the good of the past, before your Americanism and America’s Russianism make plastic of the world.’

In drawing a lazy equivalence between capitalism and communism, Burgess ignored the suffering of the 20 million people who had been arrested and murdered for alleged counter-revolutionary crimes during Stalin’s reign of terror; and the same system of torture, execution and everyday repression remained in place for many years after the collapse of the Soviet system. In You’ve Had Your Time, published in 1990, he writes about drinking with KGB agents in Russia, as if the horrifying work of the secret police were a foible that could be overlooked as soon as a bottle of vodka had been opened.

Interviewed in 1987 by Literaturnaya Gazeta, the Russian-language journal of the Union of Soviet Writers, Burgess told them what he thought they wanted to hear: ‘Aggression, as the Russian Revolution showed, is sometimes necessary to clear old ground for new building.’ In other words, you can’t make an omelette without breaking a few million eggs. In the same interview he claimed (falsely) that his own grandfather had been ‘an old friend’ of Karl Marx when they had both lived in Manchester.

There is a historical irony in Burgess’s persistent refusal to make overtly critical statements about the Soviet system: the Russians responded by banning his own books as subversive. When A Clockwork Orange was translated into Russian for the first time in 1977, there was no possibility of the novel being distributed in the normal way through Soviet bookshops. Instead, it was printed in Tel Aviv and smuggled into Russia, where it quickly gained popularity as an underground samizdat publication.

Honey for the Bears is published by W.W. Norton.