Burgess and the Atomic Age: Tremor of Intent

In 1965, the year before Burgess published his spy novel, Tremor of Intent, Ian Fleming’s James Bond novels sold more than 15 million paperback copies in the UK alone. Given the vast enthusiasm for espionage fiction on the part of the book-buying public, it’s understandable that Burgess was keen to cash in on this publishing phenomenon.

His other, more serious purpose was to write a novel which would investigate some of the moral grey areas of the Cold War. The book deals with the misappropriation of nuclear secrets by the Russians, following the decision of Edwin Roper, a leading atomic scientist, to leave England and form a new allegiance to the Soviet Union. The novel begins with a long letter written by Roper’s old school friend, Denis Hillier, a professional assassin who has been sent to bring him home or kill him. 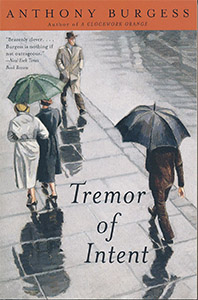 Burgess’s drafts and notebooks, which survive in the Foundation’s archive, reveal that he planned the novel as a homage to James Joyce’s Ulysses, with the original aim of writing each section in a different genre (letter, monologue, memoir, and so forth). It is clear that he abandoned this plan when he was about halfway through the novel, since it would have placed severe restrictions on how the story would unfold, as well as being out of keeping with the chosen genre of the spy thriller.

Tremor of Intent explores the ethical dilemmas of the atomic age through its treatment of nuclear weapons and the morally dubious science which stands behind them. When Roper becomes a communist and defects to the USSR, he threatens the safety of his home country. His conflicted sense of loyalty endangers everyone he has left behind in Britain, and Burgess exploits the full potentialities of this theme. The novel also proposes an interesting parallel between twentieth-century politics (the dark underworld of spies and double-agents) and the divided loyalties felt by English Catholics during the Tudor period: should they remain loyal to the English monarch or the pope in Rome? Burgess returned to this subject in A Dead Man in Deptford, his novel about the playwright and spy Christopher Marlowe, published a few months before he died in 1993.

Hillier encounters genuine evil in the form of Mr Theodorescu, an international man of mystery with a Romanian name and a perfect English public-school accent. Having administered a truth drug by nefarious means, Theodorescu attempts to extract secret information from Hillier, with the intention of selling it either to the Russians or the Americans. He does not care which side ends up with the intelligence: it is simply a question of who will pay the highest price.

The moral centre of the book may be located in Hillier’s (and Burgess’s) questioning of the unprincipled neutrality of Theodorescu’s position. Given the historical reality of the Cold War, the novel suggests, it is imperative that everyone should choose something to believe in — a political ideology or a nation state — and remain constant in that belief. Theodorescu is a villain because he believes in nothing more substantial than personal wealth. His neutrality is presented as the ultimate evil. 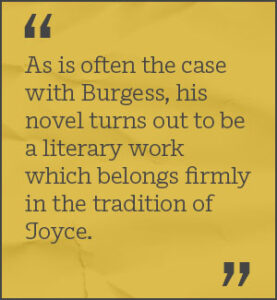 Burgess foregrounds his credentials as Joyce’s disciple and inheritor at the end of the novel, which is set in Dublin. A man called John (probably John Burgess Wilson) is making a film about James Joyce in a pub, and Hillier, who is drinking there, is worried about being recognised if he is caught on film. The camera crew give him a newspaper and he agrees to hide behind it. In a playful piece of self-referencing, Burgess draws on his experience of having travelled to Dublin to make a similar film in 1965, while he was planning Tremor of Intent. But this episode also tells us something important about the book we are reading: it is not (or not completely) a James Bond-style adventure. As is often the case with Burgess, his novel turns out to be a literary work which belongs firmly in the tradition of Joyce, despite the images of guns and semi-nude women that appeared on the front cover of the first edition.

Among its other accomplishments, Tremor of Intent deserves to be regarded as Burgess’s most detailed statement about the atomic age. By investigating the ethics of nuclear technology, he demonstrates that his novels are capable of articulating complex ethical problems and engaging with the global politics of the mid-twentieth-century. This is a much under-estimated work, which shines a light onto the shadowy history of the Cold War.

Tremor of Intent is published by Serpent’s Tail in the UK and Norton in the US.