Doris Lessing, who has died aged 94, was one of the most distinguished writers of her generation, and one of the most genuinely international. She was born to English expatriate parents in Persia (now known as Iran) in 1919 and spent the early part of her life in Southern Rhodesia (now Zimbabwe), where she became politicized by her experience of colonialism and racial segregation. Having extracted herself from two unsuitable marriages, she arrived in London in 1950 with the manuscript of her first novel, The Grass Is Singing, in her suitcase. From that point onwards, she published an average of one book per year until 2008. Age did not diminish her appetite for writing. If anything, it made her more determined to push on. 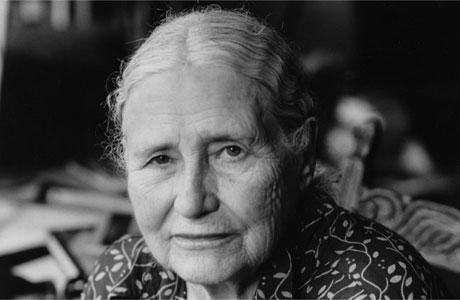 At least two of her novels were reviewed by Anthony Burgess, and his copies of her books are now in the reading room at the Burgess Foundation. His review of Lessing’s most famous novel, The Golden Notebook, which appeared in the Yorkshire Post on 3 May 1962, demonstrates that he was already familiar with her previous publications:

‘I am late with the new Doris Lessing. I make no apology: it has taken me a long time to read (568 pages of close print) and at the end of it all I feel cheated. This talented writer has attempted an experiment which has failed, essayed a scale which is beyond her.

There is no doubt about the great moral virtues here – intelligence, honesty, integrity – but it is the aesthetic virtues that seem to be lacking. The characters do not really interest us: when we have dialogue it is strangely unnatural. Mrs Lessing’s old singleness of vision, her strength as a writer, is not to be found here.’

This was a severe review, even an ungenerous one, but it is clear that Burgess went on to revise his judgements as time went on. Twenty-two years later, he included The Golden Notebook in Ninety-Nine Novels, his personal selection of the best novels published in English since 1939. On this occasion, Burgess stated that The Golden Notebook was “an historical document of some importance”. So Lessing’s novel eventually took its place in Burgess’s canon of mid-century fiction alongside other works such as Nabokov’s Lolita, Joseph Heller’s Catch 22 and (unavoidably, given Burgess’s hero-worship of James Joyce) Finnegans Wake.

The other Lessing novel reviewed by Burgess was Shikasta, the first volume of her ambitious science-fiction series, which was later adapted for the operatic stage by the composer Philip Glass. Shortly after Burgess had given this novel a favourable review in the Sunday Times, he received a letter from his friend Olivia Manning, in which she complained that Doris Lessing was getting too much of the attention which should rightfully have been paid to Manning’s own works. (Alas, Manning did not live to see the television adaptation of her trilogy, Fortunes of War, in which the leading parts were played by Kenneth Branagh and Emma Thompson.)

Apart from being near contemporaries – Burgess was born in 1917 and Lessing two years later – another connection between them was a common admiration for the minor English poet Montagu Slater, whose text for Benjamin Britten’s opera Peter Grimes was said by Burgess to be “the only libretto I know that can be read in its own right as a dramatic poem.”

Although their novels are far apart in terms of style, Burgess and Lessing are both remarkable for the breadth of their literary work, and they shared a common ambition to publish in almost all of the available genres. Apart from an impressive number of literary novels, Lessing’s output included opera libretti, short stories, travel writing, stage plays and autobiography. The first volume of her memoirs, Under My Skin, which deals with her life before she became a professional writer, is a classic piece of autobiography, which (like Burgess’s Little Wilson and Big God) deserves to go on being read as long as books and reading are still permitted to exist in some form.

When she was asked, a few weeks before her 80th birthday, whether she intended to retire from writing, Lessing replied: “If I don’t write, I get tetchy and bad-tempered. My dreams are terrible. I have to write, I have to. I think it’s perhaps a kind of balancing mechanism. It’s a way of ordering reality into something more acceptable.”  Her books will remain as urgent as they always were.