Inside the archive: highlights from Anthony Burgess’s video collection

As we continue to explore our collections with our Inside The Archive blog series, we load up the video player to watch Anthony Burgess on film.

Anthony Burgess was one of the first novelists to embrace the medium of television and appeared on the small screen many times throughout his career.

As well as becoming the TV critic for BBC’s Listener magazine in 1963, Burgess presented a number of television documentaries about his own life and that of other literary figures, and wrote major works for television, including Jesus of Nazareth and Moses in the 1970s. 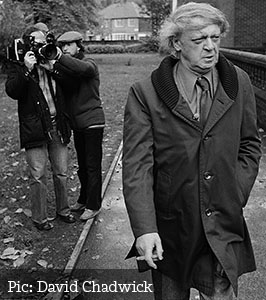 He made many colourful contributions to TV panel and entertainment shows, such as Parkinson, Wogan, and the Dick Cavett Show in America. You can watch Anthony Burgess on the Dick Cavett show here.

Many of Burgess’s television appearances are preserved in the video collection at the Burgess Foundation, which contains more than 300 tapes.

As well as these broadcast recordings, there is a fascinating archive of home video material created by Burgess’s wife Liana. Liana Burgess was an early adopter of the camcorder and recorded hundreds of journeys with her husband around the world, from shopping trips to book launches, press interviews, evenings in hotel bars, and more private moments including the couple at home and during visits to friends and family.

There are over 50 camcorder tapes in the Burgess Foundation archive, as well as a small number of Super 8 reels from the Burgess’s time in Rome in the 1970s.

Here is a compilation of a few moments from the home video collection, which offer a brief glimpse into Burgess’s life.

Burgess’s love of music lasted throughout his lifetime and at the age of 74 Burgess purchased a Bösendorfer model 170 piano for his London flat. The Bösendorfer is now at the Burgess Foundation and is regularly used for concerts and recordings.

Anthony and Liana Burgess inside a hotel room (London, 1989)

This clip, found in the middle of a number of other recordings of day trips, was filmed by Liana Burgess in a London hotel room. We suspect this was filmed in November 1989 while the Burgesses were on a publicity tour for The Devil’s Mode . Liana can be heard telling Burgess how handsome she thinks he is.

Signing and reading for Mozart and the Wolfgang (Waterstones, Manchester, 1991)

Mozart and the Wolfgang was published in 1991 and is one of a number of Burgess’s novels based around music. The novel imagines the life and world of Mozart and features fictitious conversations between composers including Prokofiev, Gershwin, Mendelssohn and Wagner. In this launch event at Waterstone’s in Manchester we can see Burgess interacting with the public, signing books, praising the appearance of the publication, explaining the ideas within the book and cracking jokes.

In Manchester for a recording at the BBC (1992)

This more abstract piece of footage is filmed from the back of a publicist’s car, heading towards and eventually leaving the centre of Manchester during a publicity tour. At the start of the film, the group exits the Mancunian Way prior to driving past the Burgess Foundation’s current location on Cambridge Street. Burgess’s correctly remembers the layout of the city centre, but as the city has changed so much he struggles to place the car’s location. On the journey out of the city along Princess Road Burgess again has difficulty recognising his surroundings until he spots his old school, Bishop Bilsborrow RC Primary School.

The video collection at the Burgess Foundation is largely unlisted, and we are working to make this important part of our collection accessible to researchers.

Our building is currently closed due to the pandemic but we hope our reading room will be open later in the year to researchers by appointment: contact us to book your visit. We look forward to welcoming you to Manchester.