Kitty Empire joins the panel for the 2022 Observer / Burgess prize 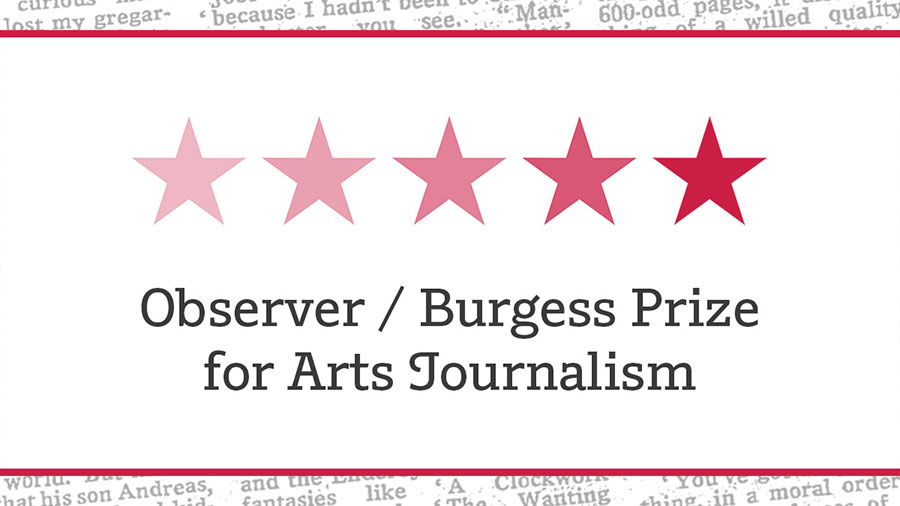 Our annual competition to find the best in new arts reviews has launched, and this year we are delighted to welcome Observer pop critic Kitty Empire to the judging panel.

The Observer / Anthony Burgess Prize for Arts Journalism challenges writers to create an engaging 800-word review of a work in the arts. It’s run in partnership with the Observer newspaper in recognition of Anthony Burgess’s long career as a literary critic for the newspaper.

The review could be of anything: an album, book, concert, exhibition, film, live stream, TV show, video game or anything else that offers the opportunity to write a lively and thoughtful piece. Last year’s winner Harry Strawson reviewed In My Room, a short film by Mati Diop, while the runners-up James Waddell and Rachel Pronger critiqued a production of John Webster’s play The Duchess of Malfi and Emerald Fennell’s black comedy Promising Young Woman.

The judges this year are Observer pop critic Kitty Empire, Will Carr of the international Anthony Burgess Foundation and the Observer’s arts editor, Sarah Donaldson. Guest judge Empire has written for the NME and has appeared on BBC2’s The Culture Show and Newsnight Review. She served as a judge for the 2008 Mercury Music Prize and, in a career move that may well have impressed Burgess, once worked the stage door for the Royal Shakespeare Company.

The first prize is £3,000 and the winning piece will be published in the Observer newspaper. Two runners-up receive £500 each, and their pieces will be published on theguardian.com along with the rest of the shortlisted reviews.

Previous Prize winner and subsequent Prize judge Shahidha Bari says: ‘The Burgess Prize encouraged me to have confidence in my judgment and challenged me to find ways to articulate it precisely and persuasively. I’m immensely grateful to have been associated with the Foundation and with Burgess’s legacy, which encourages us all to keep rattling away at the typewriter in the hopes of writing something worthwhile.’

To find out how to enter the Prize, along with terms & conditions, visit the Observer / Burgess prize section of our website.

To read previous winning and shortlisted entries, visit the archive on the Observer website.