Earthly Powers is a book that is made up of other books. 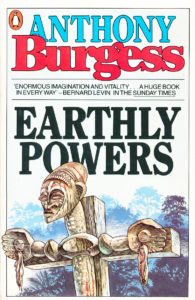 The story of Kenneth M. Toomey is directly inspired by Anthony Burgess’s immense knowledge of literature and the literary world. These inspirations vary from the biographies of authors and other celebrated figures to interpretive readings of other books. Burgess uses both fiction and non-fiction to construct the world of the novel.

Most overtly, Toomey’s life is based on that of W. Somerset Maugham, but the novel has more covert influences such as the theological thought of Saint Augustine and the different versions of the Doctor Faustus story.

The literary patchwork of Earthly Powers incorporates characters from other novels, events from literary history, language inspired by poetry and themes drawn from religious writings. Yet, the world of Earthly Powers is distinctly Burgessian, an original statement bolstered by the influences but not diluted by them.

This new weekly blog series called Earthly Powers Bookshelf is based on the book collection at the International Anthony Burgess Foundation, and aims to chart a literary map through the novel, revealing unexpected connections and helping to interpret its deeper meaning. Each of the books explored in this series was owned by Burgess, and played an integral part in the creation of Earthly Powers.

Throughout 2020, the Burgess Foundation has been celebrating the fortieth anniversary of Earthly Powers, of which this series is a part. Find out more about the Earthly Powers 40 project.