In one of the most memorable scenes in Earthly Powers, Philip Shawcross, a British man in Malaya, apparently possessed by demons, undergoes an exorcism conducted by Monsignor Carlo Campanati. Burgess quotes from a text called the Rituale Romanum during this scene. 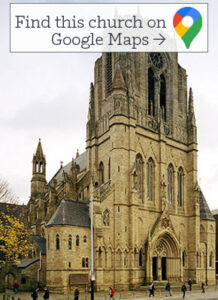 The Rituale Romanum is one of three official volumes of the procedures of Catholic worship (along with the Missale Romanum and the Breviarium Romanum). Each of its chapters deals with a different Roman Catholic ritual or sacrament, including baptism, Eucharist, penance, marriage, anointing the sick, general blessings, processions, and the exorcism of those possessed by a demon.

Burgess would have been familiar with some of these rituals from his childhood. He was raised as a Catholic, regularly attended the Church of the Holy Name of Jesus on Oxford Road in Manchester (pictured here) with his family, and was educated at two Catholic schools: Bishop Bilsborrow Memorial School in Moss Side and Xaverian College in Rusholme.

Although Burgess underwent a crisis of religious faith at the age of sixteen which led to his apostasy, he continued to address religious subjects in his writing. His book collection includes a variety of religious works, including a large number Bibles, the Koran in Arabic and English, lives of the saints, volumes of theology, histories of world religion, and a copy of the Rituale Romanum. 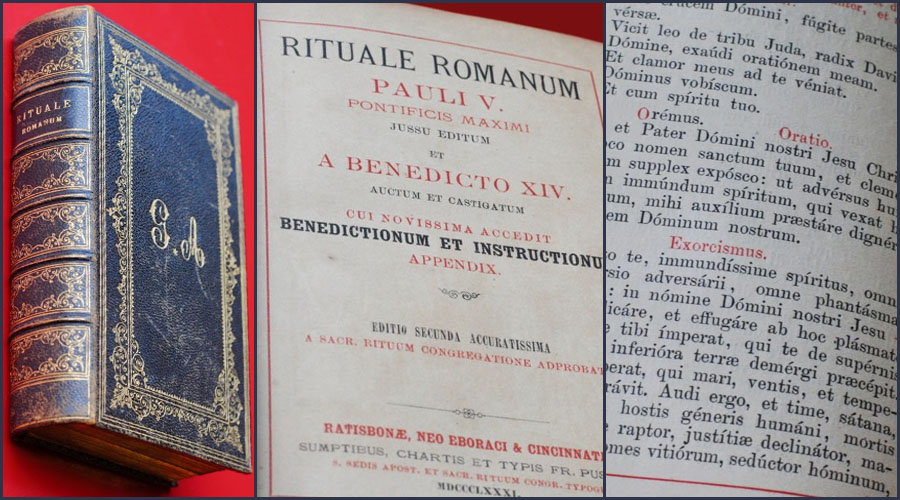 Burgess’s edition of the Latin Rituale was published in 1881. It is a small volume bound in scuffed leather, with the initials ‘G.A.’ stamped on the front cover. That Burgess used this copy of the Rituale Romanum when writing Earthly Powers is confirmed in the exorcism scene:

The same text appears on page 366 of the copy of the Rituale Romanum in the library at the Burgess Foundation.

This is not the only exorcism in Burgess’s fiction. In his novella The Eve of Saint Venus, published in 1964, On the eve of his marriage, Ambrose Rutterkin, playfully puts a wedding ring on the finger of a statue of Venus. The statue comes alive and encloses the ring in a stony fist. To expel the ghost of Venus from the house, the Reverend Norman Chauncell, an Anglican priest, is called in to perform the appropriate rite. On this occasion the goddess Venus proves to be too powerful and the attempt at exorcism is unsuccessful.

Chauncell is a very Burgessian character: a vicar who enjoys his brandy and sees evil everywhere, even in the birds, which he claims are ‘Devils in the guise of birds’. He uses the same words from the Rituale Romanum to exorcise the spirit as Carlo Campanati does in Earthly Powers. This indicates that Burgess may have owned the book as early as 1951, when he wrote the first draft of his novella.

You can find out more about Anthony Burgess’s copy of the Rituale Romanum in our Object Of The Week blog series.