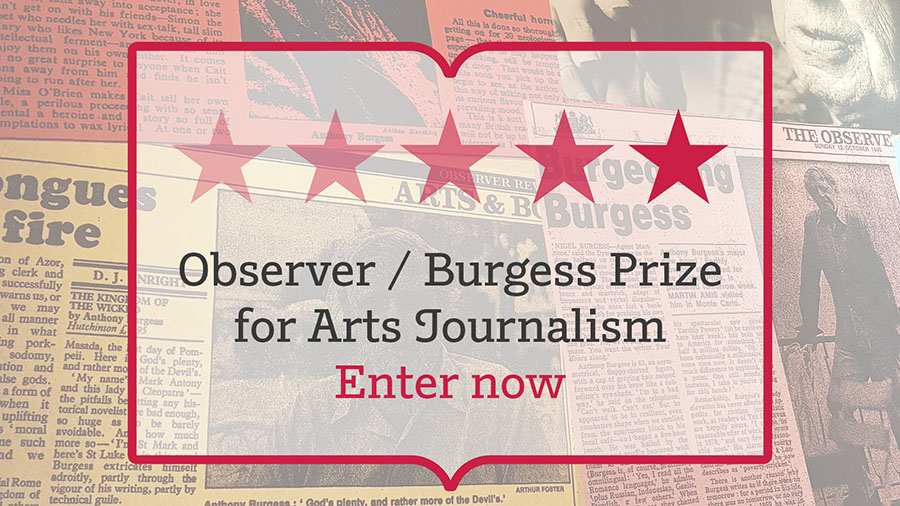 The Observer / Burgess Prize for Arts Journalism is now open for entries. Our annual review writing competition has a prize fund of £4,000 and an opportunity to be published in the Observer newspaper.

Anthony Burgess wrote hundreds of articles for many publications, including the Times Literary Supplement, the Spectator and the Yorkshire Post, which fired him for reviewing one of his own novels. Our prize celebrates his particularly close relationship with the Observer, for whom he wrote reviews for more than thirty years.

Because of Burgess’s many and varied interests, the competition welcomes reviews from any area in the arts. Cultural events have gone through tumultuous change in the past few months, and we expect some entries to reflect our new world of lockdown entertainment.

Entries have an 800-word limit, including the title, and should be about a new work in the arts. We define “new” as “an occurrence of art that has taken place since 1st September 2019. Previous winners have written about:

You have until the end of November to submit your entry. The competition is open to anyone in the world as long as the entry is in English. Our judges are Sarah Donaldson, arts editor of the Observer, and Will Carr, deputy director of the International Anthony Burgess Foundation and editor of Anthony Burgess’s The Ink Trade: Selected Journalism 1961-1993.

Need some motivation? Perhaps take a leaf out of Hunter S Thompson’s book, who once wrote an expletive-filled letter to Anthony Burgess that ended with a piece of advice that could be useful to us all: “Get your worthless ass out of the piazza and back to the typewriter.”