“It is as if Ashley Paul’s spaciously experimental, playfully contrasting aesthetics have been eerily anticipating our strange times, finally locking into the larger zeitgeist with her spellbinding new album, Ray.” – The Quietus

Ashley Paul is an American multi-instrumentalist/ composer based in London. Her intuitive process integrates free form song structures with a focused approach to sound. Using a complexity of instruments including saxophone, clarinet, voice, prepared guitar and percussion she creates a delicate palette, uniquely her own. 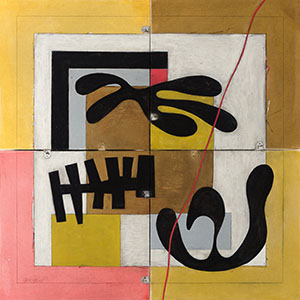 During the summer of 2020 Ashley began composing for her new trio RAY featuring Yoni Silver and Otto Willberg. Ashley released the album Ray on Slip in late 2020 (cover pictured). It is a reflection of the intense emotional year, filled with melody, humour, dissonance and longing. New cassette Another Sand will be released on Wagtail, November 2021. Performing live, the trio explores the fringes of free improvisation and song form, where melodies are dissected and slowly pieced together, alluding to shape but only occasionally binding together.

Anne-F Jacques is a sound artist based in Montreal, Canada. She is interested in amplification, erratic devices and oblique interactions between materials with the construction of various contraptions and idiosyncratic systems.

In addition to her sound work, Jacques also ran Crustacés Tapes, a sound art distribution project where people could send postcards or gifts in exchange for the different cassettes that were available. More recently, she has moved on to starting Presses Précaires, a DIY label focused on releasing “obscure and luminous sounds on magnetic tape.”

Laurie Tompkins is a UK composer, performer and co-founder and co-director of the Slip label.

From scores for samples, instruments and voices he creates a grabbable music that dreams and confounds. Bodies, things, words, and sounds strain under duress, looping their way through scenes of grubby presence, not-quite riff, mouldy echo, and swollen bombast.

His spring 2022 discs for Entr’acte, 33-33 and Hyperdelia are a thick, unruly soup of keys and computer with pianist Eliza McCarthy; a desperate suite of consoling, tanked songs with takes from Jess Hickie-Kallenbach, Teresa Winter, Gwilly Edmondez and videos by Joel Wycherley; and some dilated rotten soul with Eliza and Ashley Paul.