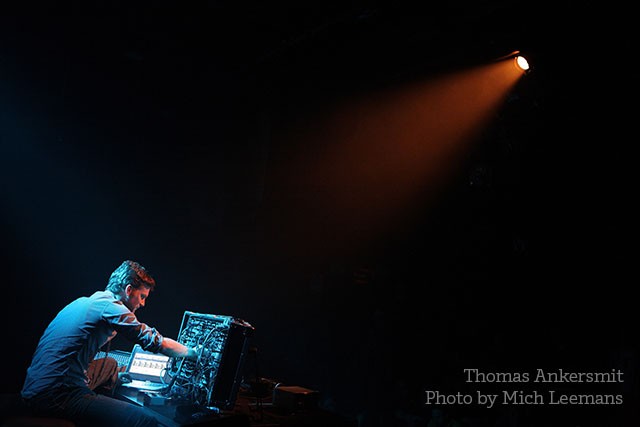 “Razor-sharp and incredibly detailed sounds appear in high-definition … Ankersmit constructs a seductive and highly unpredictable sound-poem in which space, non-space, or the illusion of one or the other, play a key role. Uncompromising and revolutionary, with the equipment on the torturing rack … Outright genius.”
→ Sven Schlijper, KindaMuzik

Thomas Ankersmit is a musician based in Berlin and Amsterdam. He plays the Serge Modular analogue synthesiser, both live and in the studio, and collaborates with artists like Phill Niblock and Valerio Tricoli.
His music is released on the Shelter Press, PAN, and Touch labels, and combines intricate sonic detail and raw electric power, with a very physical and spatial experience of sound. Acoustic phenomena such as infrasound and otoacoustic emissions (sounds emanating from inside the head, generated by the ears themselves) play an important role in his work, as does a deliberate, creative misuse of the equipment.

For this concert he will perform new, loosely structured solo material that’s perhaps more cinematic and musique concrète than his earlier work – a project commissioned by Cafe OTO.

A music of scenes, spaces, sonic perspectives — all of it performed on the Serge Modular analogue synthesiser: no samples, no field recordings, no digital effects. The music exists in the tension between abstraction and representation, with Ankersmit trying to ‘breathe life’ into the electricity, as it were. At the same time, he’s approaching the synthesizer as an ensemble, sometimes referencing traditional instruments as well (horns, strings, percussion).

The practice of Alex Mendizabal is characterized by the construction of instruments and sound spatialisation. It often adopts unusual forms, such as blind films, concerts in movement, or underwater music. He has spent thirty years researching different areas of music and sound. His proposals range from music for an orchestra to experiments with graphical notation, scores of less than a second, and concerts for geological movements. In 1996, he stopped composing in order to dedicate himself to making instruments and incorporating space and a reflection on listening as the basis of his proposals.
On this occasion, Mendizabal will occupy the Burgess Foundation with balloons, soap, chickpeas and the sound intersection produced by their coming together.

“A voyage into the warm heart of computer music.” – Conditional