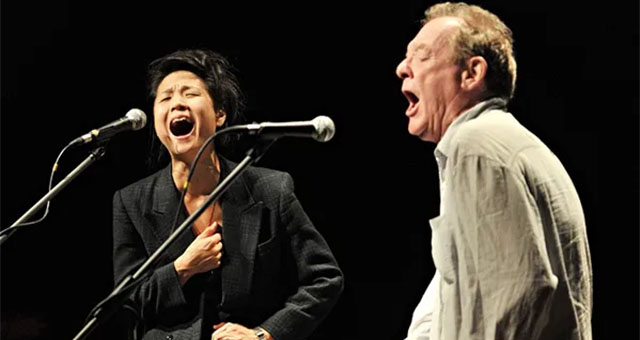 Eroteme team up with Curious Ear to start the year off with national treasure Phil Minton who, having turned 80 in 2020, shows no signs of slowing down. Performing with him is regular sparring partner and fellow explorer of the human voice Audrey Chen.

“Singing with Audrey is like working with all the possible noises of the universe and beyond, earthquakes, colliding galaxies and slugs sliding down a wet window, very quiet.” — Phil Minton, Minton at 80, The Wire, December 2020

For your safety we ask you to wear a mask and you’ll need to bring with you proof of a negative lateral flow test taken within 24 hours of arrival. A picture of one as proof is fine.

With primary focus on the interplay between the uttered sounds of the mouth and vocal chords, Minton and Chen (pictured above) plumb the depths of their most inherent and bodily instruments. Their improvisations are fearless, fragile, hungry, passionate, riotous, ululating and animalistic, yet are also in all respects, human. They express, pronounce and intensely articulate (in their fashion) the many nuanced shades of their individual and collaborative conditions.

David Birchall, Adam Fairhall and Michael Perrett meet regularly as Minimum Wage Immanence Unit to try and find the meeting point between spectralism, free improvisation and English folksong. When it goes well it sounds like a Pelt album from 1999. They’ll be joined in this endeavor tonight by a special guest, vocalist Odie Ji Ghast.

Richard Scott an electroacoustic composer and improviser living in Berlin, Germany working with gesture-controlled interfaces, modular synthesizers and sampling.
Co-curator of Basic Electricity and Auxxx clubs in Berlin. Member of Grutronic and Twinkle³.
Scott has been composing and performing improvised music for over 25 years, producing, performing and recording with artists such as Evan Parker, Twinkle³, Edward Barton, Clive Bell, Olaf Rupp, David Ross and Grutronic.