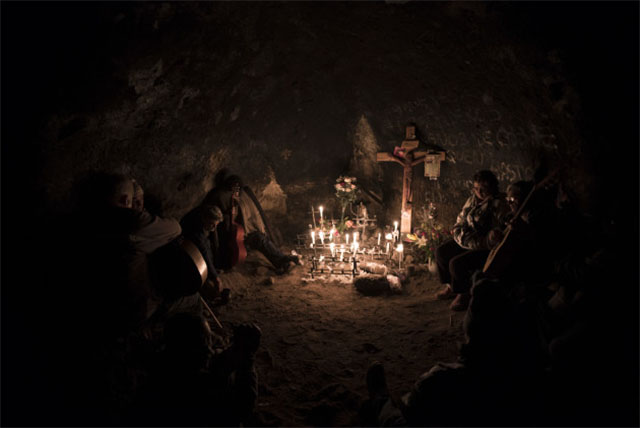 Canto a lo divino is a unique musical expression of the Chilean peasant world. It is mostly rooted in the Central Valley, a space at the skirt of the mountains, valleys and dry land between the Choapa Province in the north and the Linares Province in the south, following the slopes of the major rivers crossing the different territories and towns of this great region: Choapa, Aconcagua, Maipo, Cachapoal, Tinguiririca, Mataquito and Maule.

The canto is structured in décimas and nourished by Biblical stories and other sacralised texts. It has persisted for centuries in the voices of hundreds of men and women who have passed it from one generation to the next in various popular ceremonies. There are countless entonaciones (melodies) that define these territories, communities and subjects in unique ways and reflect the complexity of their devotion.

Community gatherings take place around images, saints, crosses and angelitos (very young children who have died), each with their own local idiosyncracies. They are also centred around life itself: productive work, family ties, places, symbols and words, traditions and modernities. The inheritances of both contemporary and ancient life inform the power and knowledge of the canto.

Join us for a night of film, music and talks exploring the canto tradition. We will share:

The mission of MUCAM (Museo Campesino en Movimiento) is to preserve traditions and encourage social development in the rich and diverse rural world of Chile, through interdisciplinary work spanning anthropology, architecture, communication, visual arts, oenology, engineering and history. The ‘museum’ does not have a single space of action, rather, it should be understood as the possibility of linking different peasant territories to create a wider cultural map or ways of living, making visible these territories’ great variety and quality of techniques, knowledge, products and customs.

Glorias Navales started as an acoustic trio with two guitars, a handmade bailes chino drum and a rabel fiddle. They rehearsed constantly in a basement in Santiago. After more than a year of rehearsing, creating and composing, a cassette came out on Traición 73 Records followed by the group’s first live shows. Shortly thereafter Graham Lambkin’s KYE Records released their first LP, Cofradía Náutica, a collection of live and studio recordings. They have since performed in the UK and Europe several times, including at Counterflows and Cafe Oto, where their 2017 show made Clive Bell’s end-of-year list and was released on the Otoroku label. Their jam is somewhere between Chilean folk music (a la Violeta Parra) and ramshackle post-Velvets psychedelia.