Will Sergeant in conversation with Dave Haslam

Blackwell’s bookshop is delighted to be hosting a special event with Will Sergeant, guitarist and founding member of Echo and the Bunnymen, at the International Anthony Burgess Foundation for the launch of his long-awaited memoir BUNNYMAN. He’ll be chatting to Dave Haslam about his career in one of the most influential and important British bands of the 1990s. Will will be available to sign copies of the book after the event.

(This event was originally scheduled for July 2021.)

Growing up in Liverpool in the 1960s and ’70s, when skinheads, football violence and fear of just about everything was the natural order of things, a young Will Sergeant found the emerging punk scene provided a shimmer of hope amongst a crumbling city still reeling from the destruction of the Second World War. 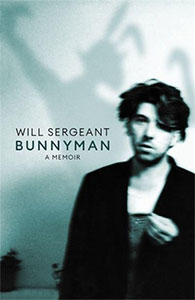 From school-day horrors and mud flinging fun to nights at Liverpool’s punk club, Eric’s, Sergeant was fuelled by and thrived on music. It was this devotion that led to the birth of the Bunnymen, to the days when he and Ian McCulloch would muck around with reel-to-reel recordings of song ideas in the back parlour of his parents’ council estate house, and to finding a community – friends, enemies and many in between – with those who would become post-punk royalty from the likes of Dead or Alive, Frankie Goes to Hollywood and the Teardrop Explodes to name a few.

It was an uphill struggle to carve their name in the history of Liverpool music, but Echo and the Bunnymen became iconic, with songs like ‘Lips Like Sugar,’ ‘The Cutter’ and ‘The Killing Moon’. By turns wry, explicit and profound, Bunnyman reveals what it was really like to be part of one of the most important British bands of the 1980s.

Tickets are £5 or £20 for a ticket and copy of Bunnyman (plus booking fee). Copies of the book will also be available to purchase on the night for £20 (credit / debit card only).