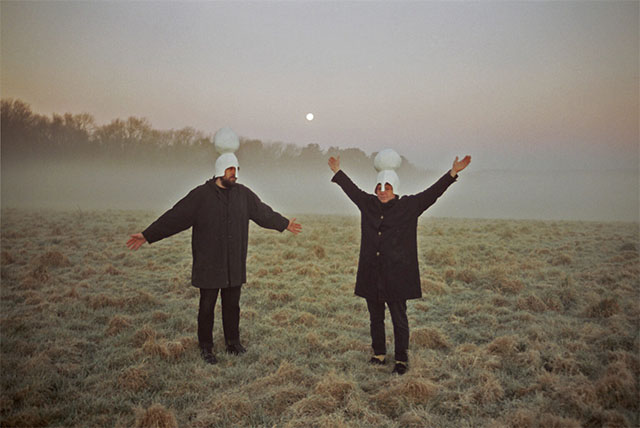 Group Listening’s first album, Clarinet & Piano: Selected Works, Vol.1, was a haunting, reflective and lovingly considered selection box of musical reworkings. It featured reimagined tracks by the likes of Arthur Russell, Brian Eno and Robert Wyatt. But it was also much more than that. In making their own record of reimagined musical works, the two musicians were doing what all music fans do: comparing favourite tracks, turning each piece over for new meaning and developing a musical understanding of each other in the process.

Fast forward a couple of years, and with a remix album of Vol.1, a 12” featuring a reworked version of the Fatima Yamaha club staple What’s A Girl To Do?, a radically re- composed remix for Lambchop and an EP of re-arranged works from Cate Le Bon’s LP, Reward under their belt, the duo started Clarinet & Piano: Selected Works, Vol.2 from an altogether different vantage point. “We’ve done a lot more together now and so have developed certain ways of working. Because these processes have become norms, it’s spurred us on to push things a bit further and to avoid repeating ourselves” they say.

While their first record was put together over an intense three-day period in a studio, Vol. 2 saw the pair take over Jones’ living room and gradually put its ten tracks together between September last year until March of this. They would record one or two songs over a couple of days then pause for the week, building and ruminating on ideas; it allowed the music to take on a more ambitious nature but also allowed in bits of chat, traffic noise and other creaks and squeaks associated with home recording. “I feel that’s part of the album’s essential character; recorded on and off throughout the pandemic in a domestic environment out of necessity; a testament to how it was possible to work at that time” says Jones.

“I like to think that Vol. 2 starts where Vol. 1 ends” Black says. “Paul and I allowed ourselves the time and freedom to explore and experiment with the recording process and the song selection itself.”

As a result the overall tone is thought provoking and engagingly unique, retaining an air of abstraction that permits the mind to wander, wonder and dream. The pieces are presented as points of stimulus, ports from which to embark on a journey towards other musical landscapes.

The pair are constantly seeking to subvert the minimalism of their sonic palette, creating a subtle but constant tension that every now and then catalyses’ the music to somewhere unexpected. Take their bright arrangement of Laraaji’s All Of A Sudden, and the addition of a drum machine that adds a sprightly propulsive edge; or their take of Niger synth pioneer Mamman Sani’s 500 Miles, which brings into focus the original’s psychedelic queasiness through the use of old answerphone messages and environmental noises, even as the instrumentation behind it is stripped right down.

Then there are moments where they use the original work as more of an initial structure from which they alter, borrow and re-work. For example, the album’s opener is Black and Jones’ own arrangement of Beverly-Glenn Copeland’s gracefully euphoric Sunset Village. It has a far looser feel than the original; the piano rolls through the track hypnotically while the clarinet takes the melody and weaves in and out rather than sitting across the top as Copeland’s vocal does. In the cross-bleed and blurred edges of its sound it’s an altogether different prospect than the track they took inspiration from – and yet it keeps Copeland’s sense of peacefulness and hope.

It’s in the way that Group Listening are able to prod, probe and contort the self-defined parameters that they’ve set themselves that makes Clarinet & Piano: Selected Works Vol.2 such an intriguing listen – and it’s the love and care they’ve taken over it that makes these versions entirely their own.