A typescript of a screenplay written by Anthony Burgess for A Clockwork Orange has appeared in the archives at the Foundation.

The typescript, which has never been published, was rejected by Kubrick, who opted to write his own instead.

Burgess’ version is interesting because it is “very different from the novel”, according to Dr Andrew Biswell, the author’s biographer and the foundation’s director.

“It’s actually quite a bit more violent than the novel. There’s a scene early on where Alex opens his bedroom cupboard and it’s full of drugs, hypodermic needles and a child’s skull.” 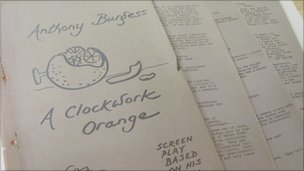