Reflecting on a residency: Peter Bakowski at the Burgess Foundation

My policy during the Virtual Residency was one of immersion — to educate myself regarding Anthony Burgess, Manchester and Manchester creatives. I began by reading the two volumes of autobiography written by Anthony Burgess, Little Wilson and Big God and You’ve Had Your Time. In them, Burgess reveals himself as bravely candid but also as an embellisher and fabricator, enjoying the licence which many writers use, to mix fact and fiction, for their own, and the readers entertainment. From reading the autobiographies I became aware of the abiding personal and creative concerns, the on-going investigations of Anthony Burgess.

On a series of index cards I wrote out the details of numerous footnotes laced throughout The Real Life of Anthony Burgess which named and dated Burgess media interviews and travel, literary and personal self-examining articles Burgess wrote.

Via email and Zoom meetings, I started digitally requesting these interviews and articles from the International Anthony Burgess Foundation. I read or listened to each provided interview several times. It was invaluable to my portraiture of Burgess to hear his voice, the sense of him being more open than defensive. I was struck by Burgess’s inquiring mind, his great curiosity, how I sensed his self-assurance but at the same time also his humility and self-deprecation.

Supplementary to the interviews and articles digitally provided, I requested from the International Anthony Burgess Foundation to view all the Burgess-related photos they hold and a complete listing of Anthony Burgess’s record and cassette collection. 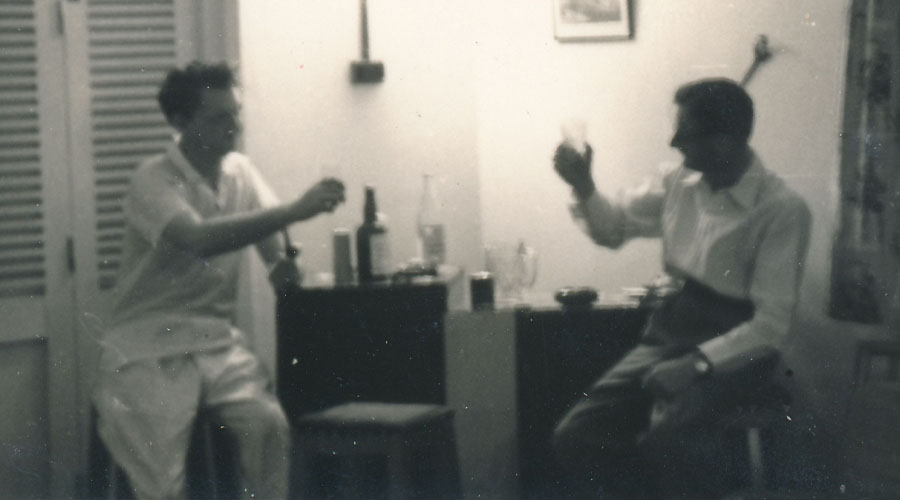 I found the photos a great help. They gave me a deeper sense of Anthony Burgess as a committed participatory teacher in England, Malaya and Brunei, convivial and social on a bar stool (photo above taken from our Malayan collection), in a pub or expounding an opinion or philosophy from a sofa, armchair or cane chair in accommodation provided or found in England, Malaya, Brunei and Italy. From the photographs I also got the sense of Anthony Burgess as a belated father, largely affectionate and playful, but also having his patience and tolerance tested by his young son. And importantly I got the sense of Burgess at his ever-portable typewriter pounding the keys, getting the sound, flow and intent of a phrase, a paragraph or a page just right.

Noting a Noël Coward recording in Anthony Burgess’s record collection, I acquired a compact disc titled Noël Coward Sings Noël Coward. With Coward’s songs I could see a ‘brotherhood’ with Burgess’s own verbal and written dexterity, the legacy of the music-hall era and that it’s far from a crime to be an entertaining writer, pointing out and lampooning human follies, mannerisms and ways. Reading the Burgess novels, The Doctor Is Sick, One Hand Clapping, Time For A Tiger, The Enemy in The Blanket and Beds in The East, I was struck by Burgess’s ability to deftly balance the comedic against the tragic, to show the often-shambolic nature of institutions, such as hospitals, colleges, government, military and colonial bureaucracies and their staff.

Via Burgess’s journalistic and book-writing practice, evident in the material I accessed, I became increasingly aware of Burgess’s sense of diligence driven by practical fee-earning deadlines but significantly by his heightened awareness of time and mortality. Burgess’s diligence “against the clock” was a crafted range of output, a creative defence and defiance against the too early deaths of his mother, sister, father, fellow soldiers in WWII, his first wife Lynne, and his own ‘health scare’ — a brain tumour, misdiagnosed in 1959.

My non-Burgess Manchester-related poems were realised via watching the film, based on Martyn Hesford’s play, Mrs Lowry & Son; the Ken Loach films, Looking For Eric and Raining Stones; the Shelagh Delaney play A Taste of Honey, and listening to the studio recordings of GoGo Penguin (pictured below).

The 2022 Virtual Residency, the wealth of material the International Anthony Burgess Foundation provided, the thinking and crafting that material inspired, enabled me to write poems I couldn’t have written without the experience of the residency.