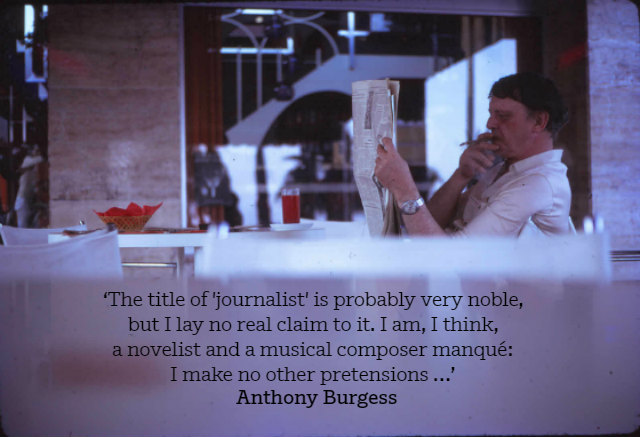 Here are the winners of the 2022 Observer/Anthony Burgess Prize for Arts, our annual prize for the best new writing about the arts.

The overall winner and two runners-up were announced in an online ceremony on 25 February 2022. They were as follows.

The first prize was £3,000 and the winning piece was published in the print edition of the Observer New Review and online at theguardian.com. Two runners-up also received £500 each and had their work published online.

The winners of the 2022 Observer/Anthony Burgess Prize for Arts Journalism were:

A huge thanks to our judges, Kitty Empire and Sarah Donaldson at the Observer, and Will Carr at the Burgess Foundation. They enjoyed reading your entries, and congratulations to the winning writers.

The shortlist (read the entries on the Observer website)

Ian Cowmeadow’s review of Maurice Broomfield’s ‘Industrial Sublime’ at the V&A Photography Centre, London.
Sample extract: “In among the dramatic lighting, giddying contrasts of scale and a cast of dedicated operatives driving industry ever onward, he alone confronts the camera.”

Mathias Gjesdal Hammer’s review of Alaa Abd El-Fattah’s You Have Not Yet Been Defeated.
Sample extract: “[He] blows up the distinction between theoretical debates and political engagement. Even while behind bars, theory and activism go hand and hand.”

Alice Hughes’s review of Love Life on HBO.
Sample extract: “It’s all there, the highs and lows of relationships: the giddy wait for a text after a thrilling date, the agony of someone you love making life choices that don’t involve choosing you…”

Calum Jacobs’s review of Lear Alone by the And Tomorrow Theatre Company.
Sample extract: “By the end of the first episode he has us in his spell, the full range of Lear’s giant emotional swings captured in his sunken, weathered eyes.”

Rhoda Koenig’s review of ‘Brutal Beauty’ at the Barbican, London.
Sample extract: “…a blotchy, pock-marked surface that, when used for flesh, can appear as distressing as the result of a traffic accident or as perversely enticing and luscious as decay.”

Momtaza Mehri’s review of The White Lotus on HBO.
Sample extract: “Tight grins stretch the faces of workers who hide pregnancies on the job while micromanaging the wealthy’s needs… Anyone who has ever toiled in hospitality will probably wince.”

Rachel Walker’s review of Sally Rooney’s third novel Beautiful World, Where Are You?
Sample extract: “Rooney’s third-person perspective is cold, emotionally uninvested and devoid of interiority. This detachment is a risky move.”