elcome to Anthony Burgess and Shakespeare.

Throughout his career, Anthony Burgess was fascinated by the writing and life of William Shakespeare.

Shakespeare’s plays and poetry, and the story of his life, inspired Burgess to write novels, critical studies, a biography, a ballet, chamber music and a musical film. As a teacher, Burgess passed on his love of Elizabethan drama to his students through lectures and textbooks; and as a journalist, he celebrated Shakespeare’s language and his importance in our own time.

Explore these pages to find out about the influence of Shakespeare on Anthony Burgess, and the fresh interpretations Burgess brings to his work.

nthony Burgess first studied Shakespeare’s poetry and drama when he was a schoolboy at Xaverian College in Manchester.

He recalls his first reading of Venus and Adonis as an emotional experience: he was immediately struck by the poem’s sensuality. In the 1950s, when he lived in a village near Stratford upon Avon, Burgess was able to identify autobiographical elements in the poem’s English pastoral setting and in its central characters. Adonis is wooed by Venus, as Shakespeare was by Anne Hathaway. Burgess argued that an understanding of Shakespeare’s work can be enhanced by a knowledge of his life.

In 1958, writing as John Burgess Wilson, Burgess published a history of English literature in which he provides an overview of Shakespeare’s character, aspirations and experience. His stated aim is to understand the plays better by getting inside the skin of the man who wrote them. 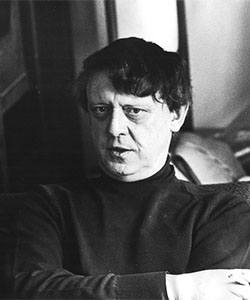 Burgess’s Shakespeare was a man from the provinces who sought to transcend his working class origins and gain the status of gentility through education and sheer hard work. He was an outsider; an actor and writer for hire, with an eye on the here and now, rather than posterity; a lover of language; an astute observer of humanity and unsurpassed articulator of what it is to be human. These traits formed the basis of Burgess’s response to Shakespeare’s work, and led to a strong self-identification with certain aspects of his life and character.

In 1964 Burgess published his novel Nothing Like The Sun: A Story of Shakespeare’s Love-Life. This bawdy, comic tour de force uses a version of Elizabethan English and is full of historical detail. Explore our dedicated pages to find out more about this remarkable novel.

In 1970 Burgess published a lavishly illustrated biography, Shakespeare. Building imaginatively on the few facts known about Shakespeare’s life, Burgess’s re-telling of the story draws on the techniques of fiction-writing to approach its subject. Visit our biography pages to find out more about Burgess’s distinctive interpretation.

When he was teaching at City College New York in 1973, Burgess delivered a series of lectures on Shakespeare’s life and work. The audio recordings of these have recently been discovered. They reveal Burgess talking passionately and with enormous wit and charm. Listen to extracts and learn more about this series.

Burgess’s parallel life as a composer led him to create several pieces of music based on Shakespeare’s life and work. These include a ballet suite completed in 1979, Mr WS, as well as settings of Shakespeare’s songs. Hear extracts from these pieces and more.

Shakespeare appears as a character in Burgess’s novels and short stories, such as Enderby’s Dark Lady, A Dead Man In Deptford and two stories in his collection The Devil’s Mode. It is clear that Burgess’s identification with Shakespeare was an important element in his creative responses. Find out more about the connections between Burgess’s writing and Shakespeare.

Listen to Anthony Burgess talk about his love for Shakespeare’s work in this rare audio recording, made for the Book Society in 1964.

This podcast episode examines Anthony Burgess’s relationship with Shakespeare and his works, including discussions of his Shakespeare biography, his novel Nothing Like the Sun and his imaginative interpretation of the bard’s life.

Featuring music from the little-known and unfilmed musical Will and Burgess’s Shakespeare ballet, Mr WS, this is an excellent introduction to one of the greatest influences on Burgess’s creative work.

Listen to Andrew Biswell and Rob Spence discussing Nothing Like the Sun.

In this episode, Anthony Burgess experts Andrew Biswell and Rob Spence revisit Nothing Like the Sun, Burgess’s novel about Shakespeare.

Written for the 400th anniversary of Shakespeare’s birth, the novel is a creative rendering of Shakespeare’s love-life and his experiences in theatrical London. This podcast discusses the innovative use of language, the composition of the novel, and Burgess’s lifelong preoccupation with Shakespeare and his contemporaries, such as Christopher Marlowe.