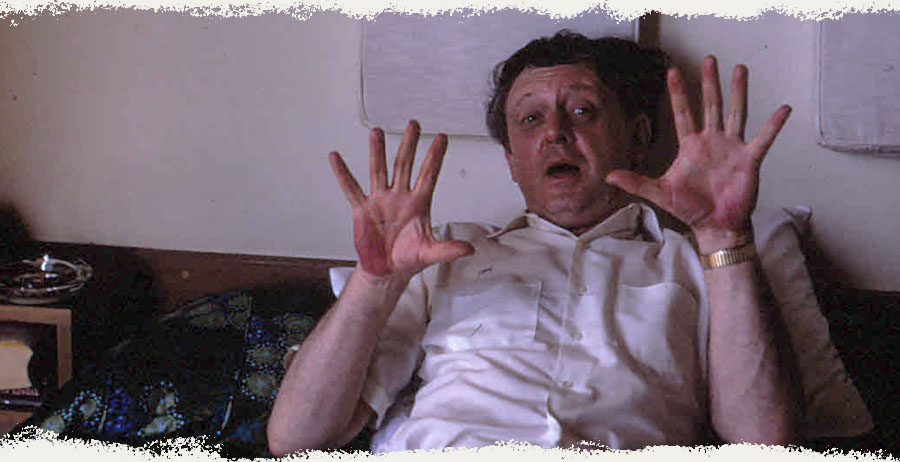 Anthony Burgess was fascinated by the possibilities of language, and his invented languages in Quest for Fire imagine the speech of primitive humans in a complex and subtle way.

The director of the film Jean-Jacques Annaud remembers Burgess’s linguistic skills as the primary reason the production approached him:

I went to Anthony Burgess because before being this famous icon of literature he started as a teacher of languages. For example, he was a teacher in Malaysia where he had to learn Chinese in order to teach English to the Malays. His real speciality was ancient Icelandic, for which he had to learn Danish, all the Scandinavian languages, Norwegian. He also knew how to speak Laplandish. He knew about 25 languages and he was just phenomenal to work with, such a character.

Here is a rarely seen article by Anthony Burgess in which he explores the origins of language, and describes what it means to him. Originally published in 1983, it has never been reprinted until now.

Man is called in Greek the Zoon phonanta or talking animal. What makes humanity different from the brute creation is its capacity for constructing a system of auditory signs which stand not only for its thoughts and feelings about the outside world but for the outside world itself. You will say at once that certain birds talk and some of them, such as mynahs, talk very well. Chimpanzees can be taught a number of words and a few simple linguistic structures. But only human beings are defined by their capacity to originate whole languages, not merely mimic parts of them or handle a few nouns and verbs. When an animal began to talk, that animal called itself man.

We all have a vague, and totally false, notion of very primitive man making a few Tarzan grunts and howling vocables, usually at the same time accompanying these gruff melodies on the drum of his chest. But human language almost certainly did not begin like that. It began as a continuous babble and it probably began in the dark. The dark is always frightening, especially when one is alone in it, and man learned very early in his career to maintain the sense of society, the comforting conviction that he was not alone, when the sun went out and the moon had not risen and the cave had no lamp. Speech certainly came before the discovery of fire. We still tend to use speech not for conveying messages or expressing feelings but merely for establishing and sustaining human contact.

The anthropologist Malinowski called this kind of social speech ‘phatic communion’, phatic deriving from the Greek phatos, meaning spoken. The act of speaking, the speech act, serves primarily the end of sociability. It does not have to mean anything, but it has to be continuous. At dinner parties a prolonged silence is the most embarrassing thing in the world: it seems to indicate that sociability has failed. It is often broken by more than one person’s speaking at the same time excuse me sorry after you no, after you and what is said is far less important than the fact of somebody having said something, anything. Everyone breathes a sigh of relief, especially the hostess.

We have no means of knowing what the language of, say, Stone Age man was like, but we know something of that ancient language known as Indo-European or Aryan because its structure and some of its vocabulary, much changed, survive in the daughter languages, which means most of the languages of Europe. It seems to have been a complex language, with a rich grammar, not at all like Malay or Chinese, and it is fairly certain that the further back we go in our study of language the greater complexities we find.

The simplification of language is essentially a part of the modernization of language: modern English is grammatically much simpler than its ancestor Anglo-Saxon, and Italian and Spanish are much simpler than their mother Latin. It is wrong to think of the first talkers taking a few linguistic bricks, cementing them together, then baking more bricks and adding them to make a more and more imposing structure. An original babble was associated with a particular feeling or thought, but it was only in the period after, say, the break-up of the Roman Empire that the specialists we call grammarians began to analyse the component parts of this babble and come up with terms like noun, verb, adjective, adverb.

Noam Chomsky, the most important, certainly the most influential, specialist in linguistic theory that the post-war period has produced, has suggested that every human being has built into his skull an apparatus that equips him to master the whole of language, any language. We all say things we never said before, and without much conscious effort; we’re always inventing new things to say; we have within us an apparently infinite capacity for generating new statements. That is the great human endowment. This endowment is based, however, on a very simple peculiarity of the human brain — its capacity to think in opposed structures.

Look at it this way: the spectrum has innumerable colours in it, and one merges into another. Man learned to pick out colours as separable items. He did more; he learned how to make them into signs of opposed meaning. You have only to think of a traffic signal to see that this is so. Now out of the babble of noise which the human vocal system is capable of producing it is possible to separate specific sounds and oppose one to the other. Pick does not mean the same as pig, because /k/ is opposed to /g/, though those two sounds only differ (in English, anyway) in that one is breathed and the other sung. This structuralist gift of the human brain enables us to talk of phonemes (speech sounds) and morphemes (combinations of phonemes that convey meaning) tiny structures that oppose each other in doing separate jobs and, taken together, add up to a language.

What interests us most is why a word should mean what it does. If primitive man wanted to indicate that something was high he probably instinctively stretched up his arm, just as he brought it down to indicate that something was low. In other words, he used a mimetic or imitative faculty. There is no evidence to show that the physical gestures which are speech (after all, you use your vocal organs very athletically to produce phonemes) were attempts at imitating the things or actions or feelings described. Moon and luna and bulan suggest something round and high (the lips pout and the front of the tongue is raised almost to touch the roof of the mouth, which the Malay language calls the langit or heaven), but such imitative words are very rare indeed. Dog does not sound like a dog, nor does cat suggest a cat. If you want the technical terms, language is not iconic symbolism. Words are very arbitrary things. If it is suddenly decided that cat shall mean not a cat but a dog, it may take some time to accept the idea, but there is nothing intrinsically illogical about it.

With no evidence at all, I think of primitive man looking up at the moon and saying something like garavapolagiya. He does not mean moon; he means: there is a situation in which I am here looking at that round object in the sky which began low and is getting higher. In the morning, seeing the sun rise, he might say something like garasopalagiya. It would take him a very long time to separate out the vocables vapo for moon and sopo for sun, and to understand that the po in both had something to do with their both being heavenly bodies apparently capable of rising and setting. In other words, the analytic approach to his own speech which we take for granted — without it we could not learn foreign languages — was something that it would take him many thousands of years to learn. As for being able to write speech down in ideograms or letters well, that came very late indeed. The Western alphabet — Latin, Greek or Arabic — is an idea so new that it still hasn’t caught on in China or Japan. We are, it has to be confessed, almost totally ignorant of the origins of human language, but we do know that it was the evolutionary breakthrough which produced the species we call man. And when language first appeared it was already fully grown: it was not a tentative groping towards greater and greater articulacy. The symbolization of the outside world (which includes our own bodies) was the key to the creation of inside worlds — sciences and technologies. Language is our greatest possession. We would be wise to ponder on its mysteries and cherish the miracle that it is. But we will never be able to understand it. Chinese and Hindi and English, yes. Language itself, no.